Nadars are one of the earliest inhabitants of India. Their origin was in the South, known as "Komari Land" probably related to the southern tip of India - Kanya Kumari. There are records which establish their links with the Chaldeans, Syria, Cambodia, Java, Sumatra, China, etc., and it is well established by historians. 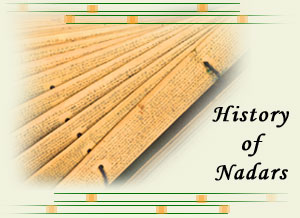 The Nadars who until the last quarter of the 19th century were known as "Shanas" or "Shanars" were originally based in the two southernmost districts of Tamilnadu- Tirunelveli and Kanyakumari. The word " Nadar" may have been derived from what many modern Nadars believe to have been the highest of the original Shanar Jatis the Nadans, with the honorific "-ar" ending added. Some Nadars claim that the Nadans were petty local chieftains, who were the heirs of the fallen Pandya dynasty.


The ancient historian Herodotus tells us that in 400 BC, the Palmyra-Tappers (the Nadars as we call them now) were Valiant Fighters and good Tradesmen, dealing with inter-Continental Trade. They made settlements in Syria, and taught the art of writing to the Greeks . They also spread the Culture of 'Burial of dead ' to the world. They exported processed Palm-Juice (in the chemical form of Alcohol) to countries like Egypt, for purification and preservation of the dead-bodies (Mummies).

The history of the aboriginal ancient Nadars, with many branches, has been tarnished, modified and fabricated as time swept by. Mostly these changes have been made after the Muslim invasions, with the support of the Brahmins . The fall of the Nadars began afterwards . Tanjore, one of the strong holds of the Tamil Nadars, was defamed. Valamkaimaalai, one of the Palm-Leaf records with the Nadars, speaks about their history. History proves that the major groups of the Nadars were once Jains and Buddhists.

By the 15th century AD, Nadars were weakened by the Nayaks because of the in-fights and dis-unity among the Nadar brothers. The tortures on the Nadars were so inhuman that in the 17th and 19th centuries the Christian Missionaries found a great 'Fishing Field' in the Nadar dominant areas. But for the Missionaries, this race would have been totally exterminated as planned by the Aryan Agents.

Prior to the northward migration, the bulk of the Shanar population was concentrated in the arid sandy regions or "Teris" of Tiruchendur in Tirunelveli district. The Shanar economy centered on the palmyra palm, then the only commercially viable crop in the region.

From the 16th to 19th century AD, the Nadars had to struggle under the new Caste system imposed by the Aryan Agents and had to fight hard to come up socially, economically and politically. It was during these periods that the great Fights like "The Temple Entry Movement, The Upper Cloth Revolution, The Human Rights Movements" by many leaders like Vellayyan Nadar,Mooka Nadan, WPA.Soundara Pandyan Nadar, Ayya Mudisoodum Perumal, Marshal A.Nesamony, etc., were fought and won over. Following World War 1, the Brahmins began to dominate the Independence movement of the Madras Presidency. The British then tried to secure the non- Brahmin support. Hence they conceded their request of designating " Nadars" instead of " Shanars" in the 1921 Census.

With the coming of the British rule to the southern districts, roads were improved and better security emerged. The Shanar populace then began to utilize this opportunity and began to move vnorthwards to sell their palmyra- products as well as dried fish and salt. Along their trade routes they established "pettais" or fortified compounds, to protect themselves against thieves and other caste men and also for them to take some rest. There were six primary centers of settlements: Sivakasi, Virudhunagar, Sattankudi, Tirumangalam, Palayampatti and Arupukkotai.